It’s time to Look Up…

If you haven’t seen the video “Look Up” already, you need to take a look.

Gary Turk, the video’s director, proposes a five-minute film centered around the addiction that many, many Americans struggle with. That problem is social media.

Turk uses interesting structure to stress his point to his viewers, first starting with somewhat of a lecture and then giving a powerful example of how it can affect us. The example is of a man and woman who fall in love, all because he looked up from his phone that one day on the street.

Then, after the heartwarming example, he provides the alternative that the man never looked up and never met the love of his life.

After watching this more than once, you see that these two examples aren’t very realistic. But Turk didn’t worry about that. Upon first view of the video, one is intrigued by these examples and tends not to notice how jurassic his examples are. The reader instead is intently focused on the documentary because of the emotional appeal and power in the message – that people everywhere should look up from what they are doing on their phones and engage in conversation. Why? Because Turk claims this is what makes society so great, the face-to-face conversation that will never go away. The director wants us to be attached to the two people in the video because the message is achieved through them.

Call it the moving Brittish accent of Turk, the emotional draw, or the background music to add to the intensity, it doesn’t matter. None of these make or break the video. The main idea is his message and he is incredibly straightforward and effective in getting his point across. This is what truly “makes” the video.

But of course, there’s more to this topic than a five-minute video clip.

The point of his video isn’t to stop using social media and phones and other technologies, but instead to simply “look up!” Look up and speak to someone who looks lost, speak to someone who might be having a rough day, talk to a new person at a party, and make conversation with your friends and family instead of sitting at dinner on your phone! You have to ask yourself, how hard can that really be?

This message could be applied to all of us and there is no place better to witness the phenomenon of social media addiction than a public area such as a school.

I’m guilty of it, just like most teens in high school. I walk the halls daily and whenever I see an unfamiliar face, either myself or the other person will automatically reach for their phone to make the encounter “less awkward.” It’s almost a habit.

To the students at Leesville Road High School and the people beyond, I am offering you a challenge to “Look Up.” It isn’t hard, and it is a satisfying feeling when you make a conscious decision to talk to someone else rather than looking down at a meaningless screen. Gary Turk never said to stop getting on social media forever, and nor am I. This is just a step in the right direction. 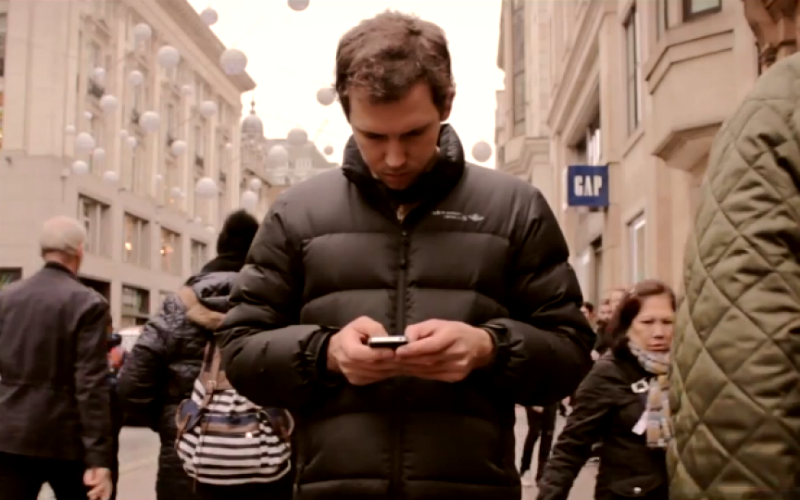 Before cell phones and social media, we were forced to interact with others. There was no social media to look down at when in an awkward situation. There wasn’t text messaging. There wasn’t Siri to ask questions to instead of humans. People had to ask people for directions if lost. It is different now because we have everything right in front of us.

There have been repercussions because of the “hypocritical nature” of the video. It’s understandable that it’s a tad odd to post a video dissing social media onto a social media site. It is ironic, that’s for sure. All that put aside, if I were trying to get the most views out of a video and wanted it to reach as many people as possible, I would go to YouTube to do this also. Clearly Turk took this into consideration and created it disregarding the perhaps hypocritical nature.

So when you are sitting in class, walking the halls, or hanging with friends, remember Gary Turk’s message. Look up, y’all.