Calvin and Hobbes keeps it classy

Walking into my great uncle’s living room and finding the full collection of Calvin and Hobbes made me very nostalgic. Immediately I sat on the floor and began to read. At one point, my siblings walked in, picking up another volume of the three book collection, and joined me. Calvin and Hobbes comics have a very special place in my family’s heart.

Calvin and Hobbes is a comic strip made by Bill Watterson about Calvin who is a whimsical, imaginative and creative six-year-old boy that spends his time with Hobbes, his confident and clever stuffed tiger of a best friend. The pair of them go on infinite adventures yet never cease to leave their own backyard.

Along with being funny and entertaining, there are many lessons, morals and messages slipped into the stories that make Watterson’s work still relevant to our lives today.

The best characteristic of Watterson’s work is its diversity and variety. With such vibrant and unique, yet familiar characters, Calvin and Hobbes appeals to boys and girls of all ages.

When Calvin said, “It’s a magical world, Hobbes ol’ buddy, let’s go exploring,” my siblings and I took it greatly to heart. Our childhood was a blur of moving to different countries and experiencing different cultures– we found this strip the most applicable to us. 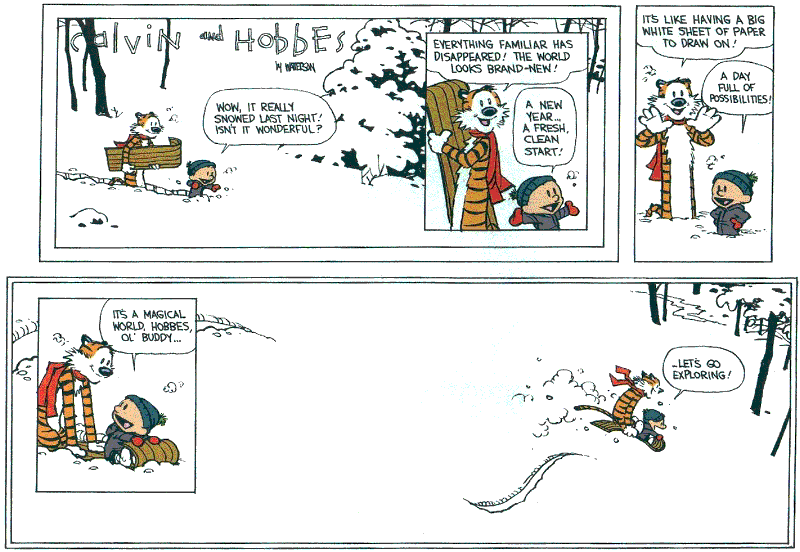 Comic strips like this portray Watterson’s intent and the influence of his work. He is clear in saying that the world can be changed and made anew. The way he explains this through the young, insightful Calvin and his best friend, the innovative, enlightened Hobbes introduces the concept with a whole new level of respect. He points out to us that we need to explore the unknown and be prepared for new experiences. The idea of the snow making the familiar forest foreign has a powerful effect on many readers, influencing them to go out of their comfort zones and explore, which is a lesson many of us still need to learn today.

As a child, you look at more of the comedic side of things. Although Calvin is very insightful, he has his moments of stupidity as well which adds an entertainment factor to the comic and attracts the attention of kids.

This comic is such a simple joke which makes it stick out in a child’s mind. If Watterson were to talk specifically about some form of technology or current event, his work would not be timeless. The appealing aspect of Watterson’s work is while the latter is inspirational and meaningful, this comic has no intent other than to get a laugh out of you.

As a kid, you don’t necessarily look at the true meaning of Watterson’s words. The thing that makes this comic relevant and applicable is that it’s as relatable as it is funny. Watterson addresses the issues of growing up with a joke about how you can’t let your child self go. He made many comic strips about Calvin’s Dad  and the amount of time he devotes to his bike which simply adds to the humour of this specific strip.  He wants to teach people that although growing up can be scary and intimidating, you can always be a stubborn, silly child at heart.

Being able to incorporate meaning while maintaining the entertainment factor makes Calvin and Hobbes a great medium for transmitting lessons. As much as I hate to say it, this comic that I spent so much of my time reading as a child is a combination of educational and entertaining– it’s edutaining. 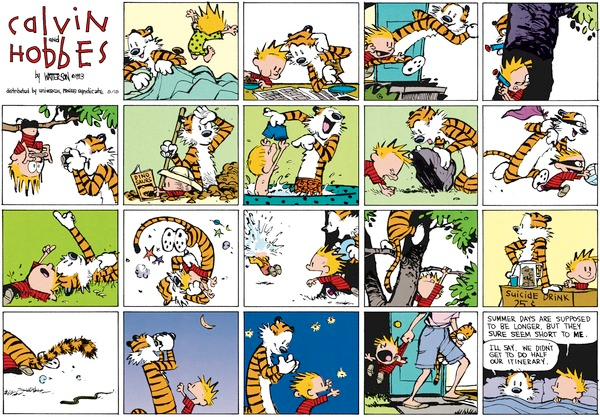 Cavin is the epitome of imagination. His best friend and all of the adventures they go on are simply an illusion made from his own mind . It’s almost intimidating for parents, knowing that children have that much self control to be able to let themselves slip away and drift off to another world where they are in complete control.

The beauty of Watterson’s work is that he incorporates every lesson through this six year old boy who is a living example of the constant struggle between material and sentimental value. One moment he’s outside, productively using his imagination to create a world beside his own. The next, he has subcombed –like many Americans– to the  consuming and harmful illusion that is television.

Calvin’s most admirable feature is his complexity because he provides an evaluation of both sides and still chooses the material possessions which gives off insight but not superiority.

Watterson also uses this comic strip as an opportunity to evaluate the TV of our day and his possible predictions for the future. Calvin talks about the tragedy that is ‘reality’ and how it is the most successful genre on TV. This strip was created in 1993 — Who knew that twenty years later we would still be drawn to the attraction that is reality TV? Through the insightful yet ignorant Calvin he is able to make social commentary on people and their unquenchable desire for the bad news over the good. With Calvin’s last line, “I love to snicker at other people’s tragedy,” Watterson makes a bold statement about people as a whole and why they’re drawn to tragedy. He says it’s to make one person feel better by knowing that their lives are not as dramatic as another. Watterson uses Calvin to satirically mock the nature of humans.

This example only increases Calvin and Hobbes relevance in the present. The social commentary that goes along with each strip has great relevance to our daily lives because he portrays them in a way in which they are timeless. The technology, setting, and people may change, but the feelings, desires or attractions will always be the same. In the case of reality TV, humans have always been attracted to the horror that is reality. Even before Keeping up with the Kardashians or Dancing with the Stars, we would be glued to our television screens watching TV shows that are supposed to be reality and this is a point that Watterson is trying to make.

Calvin and Hobbes continues to have relevance in our daily lives because the lessons and social commentary he makes are applicable to us at any time. He pushes past the materialistic characteristics frozen in time to the internal, sentimental features of a person that makes his work immortal.